You are here: Home » Blog » Renewable Heat Installations Under the Social Landlords Competition

Following up on our recent UK Domestic Renewable Heat Update, we were asked about data for the social housing sector.

Since August 2011, funding has been available through the RHPP Social Landlords Competition in 3 phases. 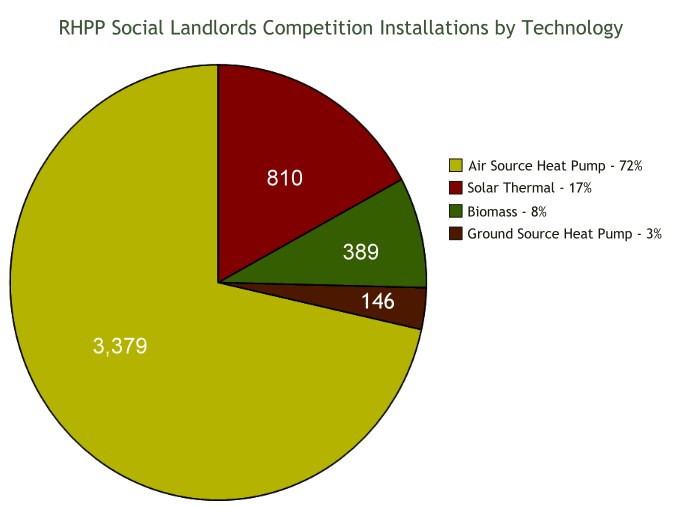 According to the Energy Saving Trust, Phase 2 and 3 combined saw funding for 132 social landlord projects to the total value of £9.4 million.

There are 2 further social landlord competitions called the Fast Track, and Reach Out schemes but data has yet to be released on the installations under these. The figures below were released by DECC and apply to Phase 1, Phase 2, Phase 2 top-up, Phase 3 and Phase 3 top-up.

As a quick comparison, the RHPP’s Householder scheme issued 20,822 vouchers in the same time period and 15,364 of these have been redeemed, so the installations under the Social Landlords Scheme have been significant. Air source heat pumps are clearly the dominant technology adopted under the Social Landlords Competition, accounting for 72% of installations. If you would like to compare activity under the householder scheme for this period, you can find details in the following section: