Green energy policies do not come without a cost. Those FIT payments have to come from somewhere and as much as we might like being green or just think that renewable energy is the future, we should still take stock of the consequences. We may not like it but there is a social justice question here. Costs borne by the tax payer or by energy companies are paid by us all. Energy efficiency and micro-generation improvements such as those covered by FIT are very likely to see early adoption in the middle to upper income brackets. With rising energy prices becoming an increasing strain, some aspects of renewables policies can be seen as an income transfer from the poor to the rich. Given that climate and energy policies do have a cost, it is very important that we carefully analyse the impacts.

The first thing to say is, you are not imagining it. Energy costs to the consumer are rising and they are expected to continue to do so. DECC recently published a report analysing policy impacts on energy prices and bills. We can see from the following graph what we all know, our energy bills are increasing. 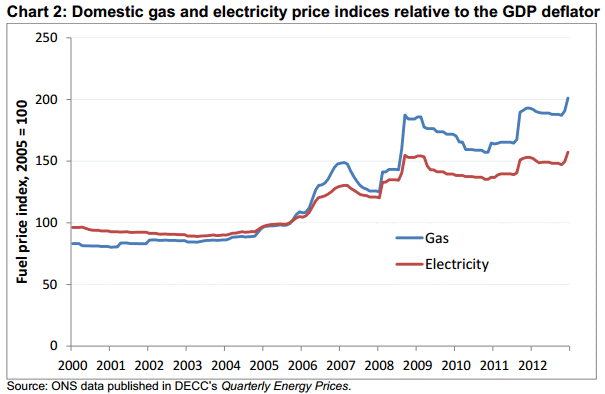 The question is, are climate change policies a significant driver in these increasing bills? Well, lets take a look: 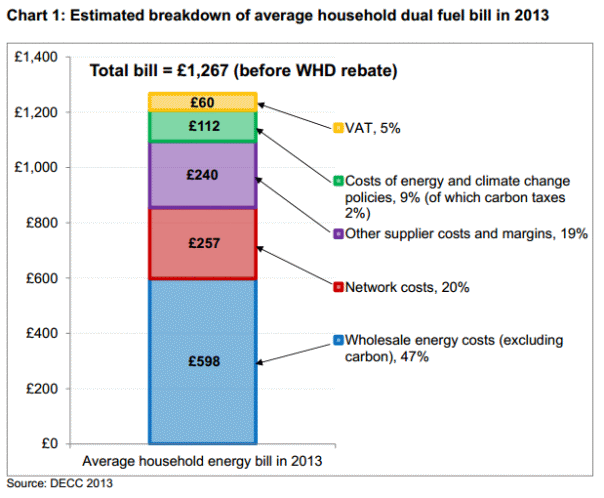 DECC estimate the average household bill (combined electricity and gas) to be £1,267. The largest single contributor to these costs is wholesale gas and electricity prices at 47%. Other major contributors include transmission and metering at 20%, other supplier costs and margins at 19% and VAT at 5%. Energy and climate change policies are estimated to contribute 9% of the average annual energy bill.

There are costs to the climate and energy policies being pursued but we have to remember that energy efficiency delivers savings. There have been 2.4 million wall cavities, 4.9 million lofts and 88,000 solid walls insulated through government schemes since 2008. DECC states evidence that shows these measures producing savings of £25 to £270 or more per installation per year. There is also a savings impact from measures like building regulations and minimum standards for gas boilers.

DECC estimate the mean impact of climate and energy policies to be a 5% saving on 2013 energy bills. Energy bills are climbing and will continue to climb but energy efficiency measures provide savings. Without them, in the “do nothing” scenario, our average bills would be even higher. This is true for 2013 and according to DECC’s analysis it will be true in the future. Even with these policies in place our average combined fuel bills are expected to continue to rise. They will however rise by less than if we did nothing. 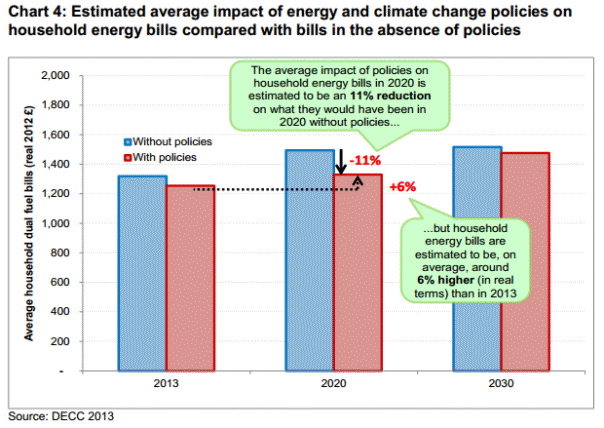 So, current climate change and energy policies have a cost but the net effect is that average electricity and gas bills are lower now than they would be without these policies. DECC expects these policies to increase in cost over the coming years but also to provide more savings. Although our average dual fuel bills will have increased by 2020, they will be 11% lower than they would have been without the climate and energy policies in place.

From a social policy perspective, the government has a responsibility to see these savings spread to lower income groups. Insulation and solar panels can’t be yuppie status symbols funded by the taxpayer. The products policy, changes to building regulations and the Warm Home Discount all have the potential to spread benefits to lower income brackets. Much will depend on the success of projects like the Green Deal and whether measures like  insulation can achieve the wide levels of adoption that are predicted.