You are here: Home » Blog » An Introduction to Solar Thermal – Solar Heating

Solar thermal is a popular choice for many householders, mainly because of the relatively low capital cost and the ability of the system to benefit a wide range of houses. Unlike solar photovoltaics, solar thermal does not produce electricity. The panels are designed to warm water which, depending on the set up, can be used to supply hot water to the home or even to heat water for swimming pools or small central heating systems. 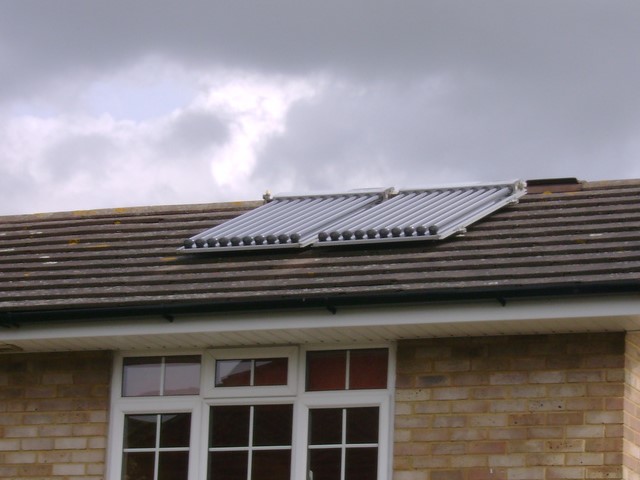 Solar thermal systems use the heat from the sun to warm a special heat transfer fluid inside the collector plates. This fluid is either passed through a heat exchanger in a hot water storage tank where it warms the water inside or in some cases is returned to the cylinder directly, and then returns to the plates to be heated again. Solar thermal is suitable for most homes that have a south or southeast / southwest facing roof space, and require a lot less space than photovoltaics; usually around 1m2 compared to 3m2 for PV.

Parts of a solar thermal system

In a typical domestic solar system, there will be three main parts:

The two main types of system are:

Solar thermal panels are very simple in their operation, and in fact it has been known for people to create basic solar collectors from old radiators painted black. However, when it comes to creating enough heat to make them a viable addition to a domestic home, a little more thought needs to be put into the design and selection of the panels. The two main options you will have are flat plate or evacuated tube.

Deciding which collector to purchase will depend on your budget more than anything else. Evacuated tube collectors have excellent insulation properties, allowing temperatures inside to reach up to 180 degrees Celsius whilst still remaining cool to the touch. This means they still perform well in cold weather, unlike flat plate collectors which suffer due to heat loss. More sunlight is captured by evacuated tube collectors too, as the higher surface area lets them remain exposed to the sun all through the day. If your budget will stretch to it, evacuated tubes are an all-round better system, but typically cost from £1,000 to £3,000 more than flat plate collectors.

What savings can you expect?

Solar thermal systems can provide up to 60% of a households hot water requirements and need very little maintenance. In terms of cost savings, reported savings range from £40 per annum up to £100, depending on the fuel they are replacing, the size of the system and the tariff the household is on. Households cannot yet apply to the Renewable Heat Incentive (RHI). The RHI is expected to be in place by the spring of 2013 and the government has stated it intends to make owners of qualifying renewable heating systems installed between 15th July 2009 and the launch of the scheme eligible for the RHI. Solar thermal is expected to attract a payment of 19.2p per kWh of heat generated. In the meantime, households can apply to the Renewable Heat Premium Payment scheme (RHPP) which grants £600 towards the initial cost of a solar thermal system. The Green Deal scheme can also provide an affordable way to install a solar system right now, with repayments being made via energy bills.

This entry was posted in Renewable Heat, Solar. Bookmark the permalink.